Jared Foley still remembers the days when our team at Tangram 3DS would sit in the market square at the center of downtown Portsmouth and sip coffee while chatting about work. It was a frequent ritual for our architectural visualization studio. After all, Breaking New Grounds—once a popular local coffee shop—was on the ground floor of the building where Tangram was founded by Stefan Vittori in 2003. 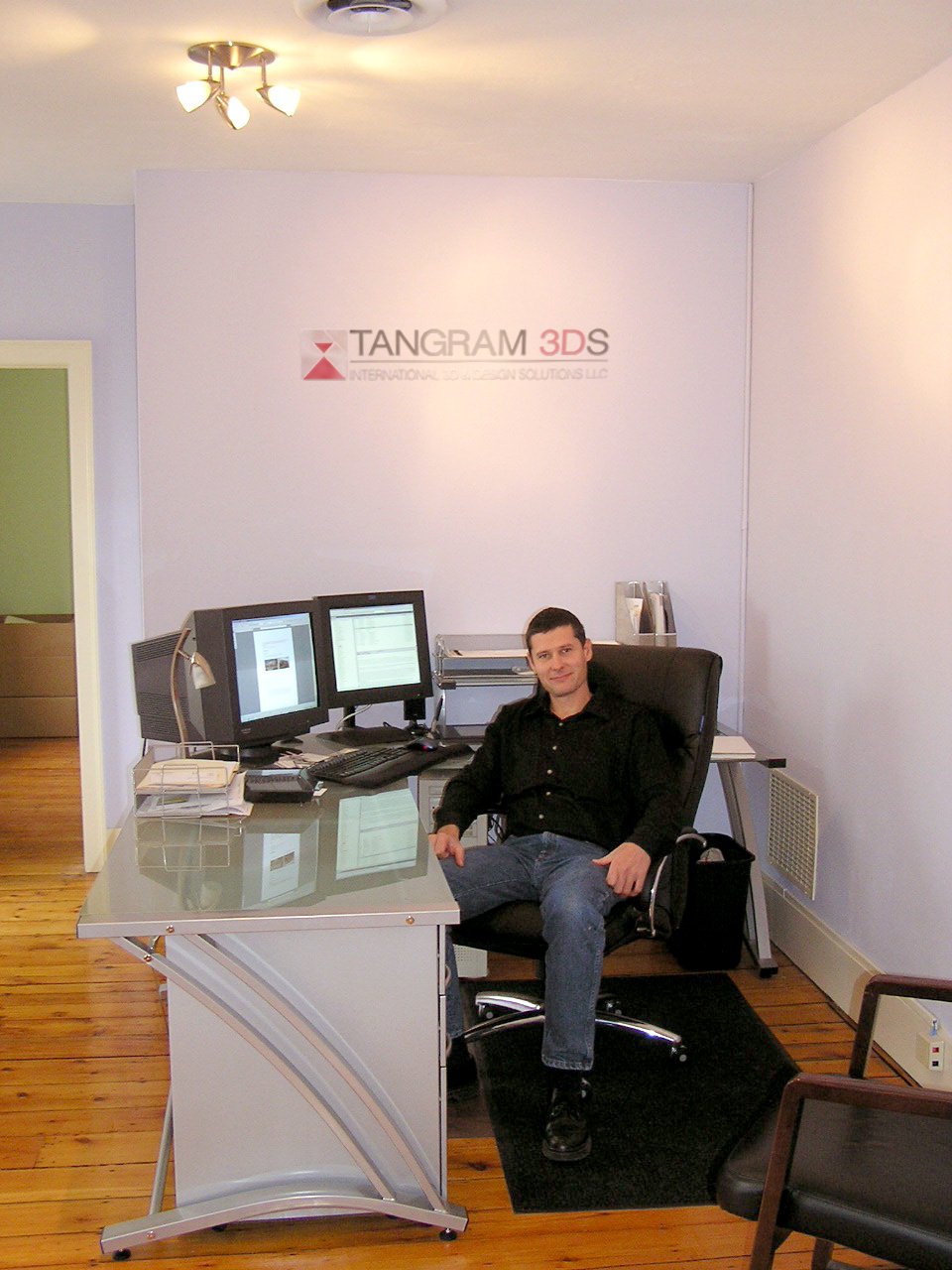 Tangram 3DS founder Stefan Vittori at his desk in the original Portsmouth office.

Portsmouth’s iconic and thriving downtown area was home to the office of Tangram 3DS until 2008, when we moved across the bridge to Kittery, Maine, to expand. Our roots in Portsmouth remain strong, however. Even today, we do a large volume of work for Portsmouth’s local architects and interior designers. Some of those relationships have endured for ten or fifteen years. 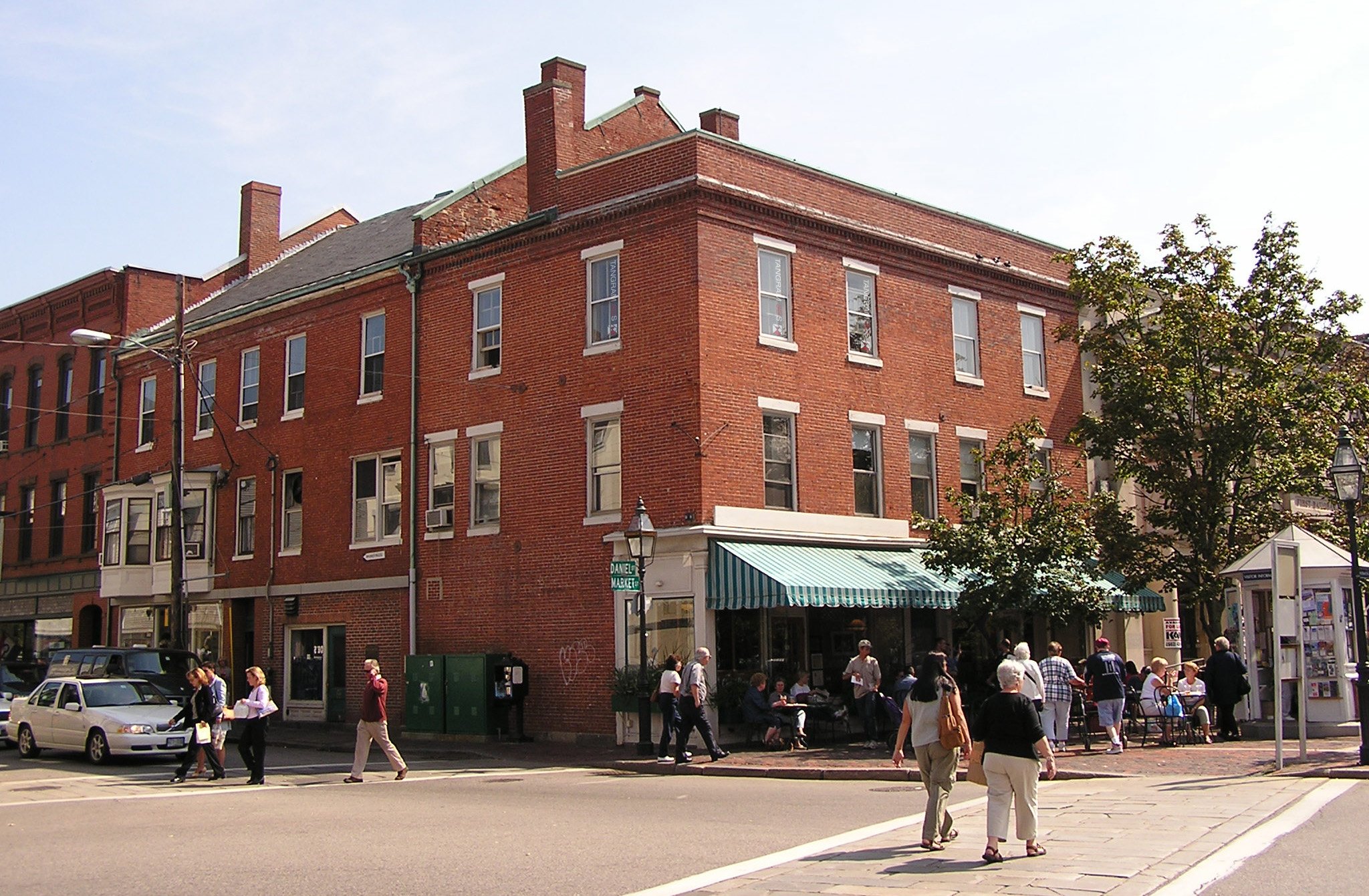 The exterior of the old Tangram office in Market Square.

But Jared’s roots run even deeper. He was born here, and grew up walking the quaint sidewalks of the historic seaside town, long before he became Creative Director at Tangram 3DS. It’s been tough to watch as COVID-19 has brought silence to the vibrant streets and threatened to shutter some restaurants permanently. Portsmouth is a restaurant town. Jared has friends working in several of them, afraid that they’ll go out of business before the economy fully recovers.

Halfway through June, we got an email from CJ Architects about the formation of a Portsmouth Design Professionals Alliance to head up an economic recovery project for the city. When asked if we’d like to participate, it was easy to say yes.

All of the local professionals, architects, and designers are busy, but we also all care deeply about the town that has given us so much. Together, we knew we could do something no one else could—provide a clear vision for returning life and safe, responsible commerce to these silent streets. 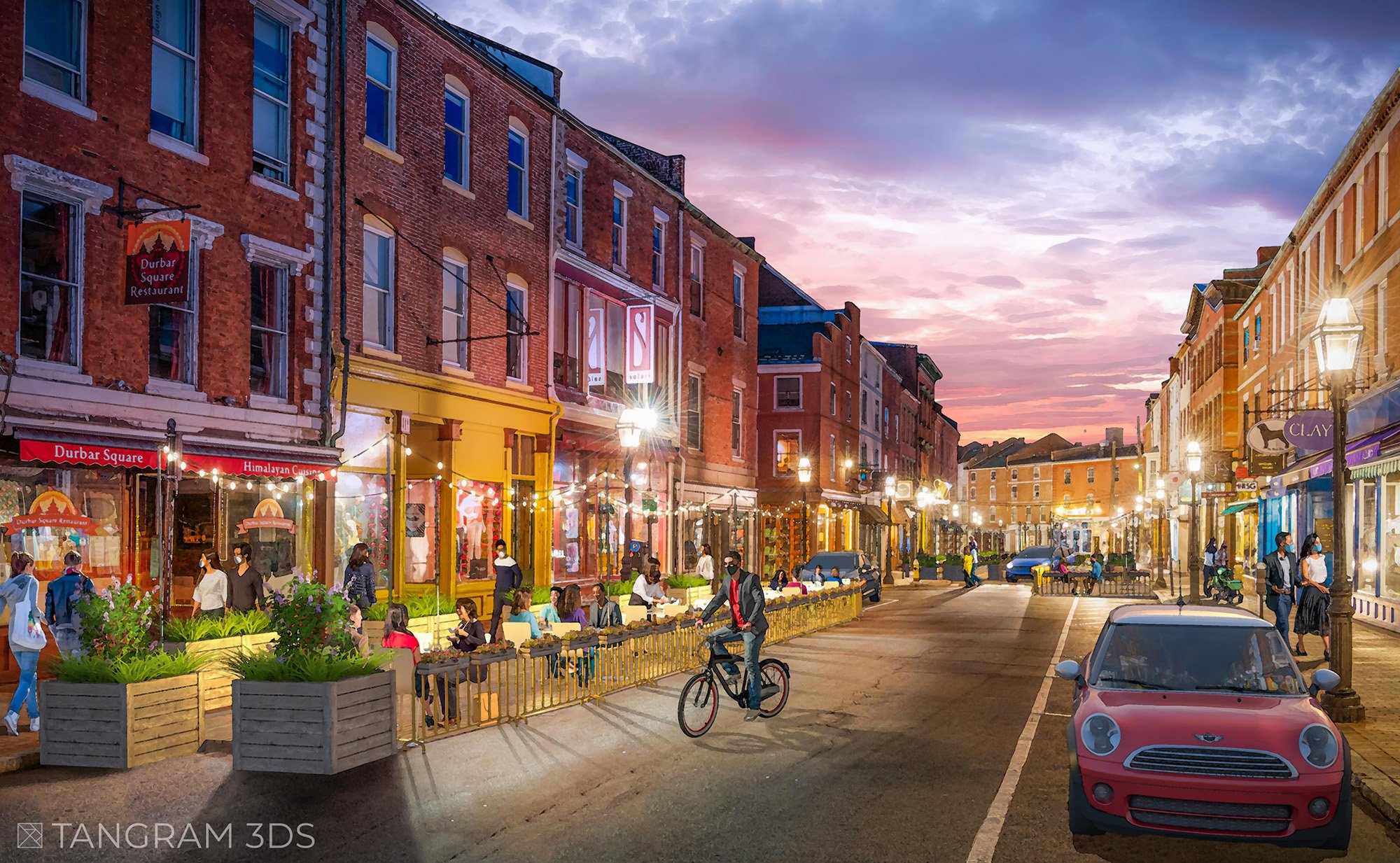 Many of our existing clients worked alongside us on this exciting volunteer project, which came together with amazing urgency and swiftness. In the span of a week, we would all collaborate on a workbook full of creative solutions to transform the quiet sidewalks and streets into communal outdoor business spaces—a place where the public can gather safely to enjoy dining and shopping.

Our hope is to see our beloved downtown businesses take inspiration from these ideas and continue to thrive as the backbone of the local economy.

The Task at Hand

When Governor Sununu announced the state’s Stay at Home 2.0 orders, several of Portsmouth’s elected officials proposed the formation of the Portsmouth Citizen Response Task Force to aid in the implementation of these guidelines and re-opening of the economy.

Restaurants would need to cut down to 50% capacity, but in some situations the required math and measurements would mean dropping capacity as low as 30%.  A lot of communities have decided to expand business to areas outside of the business to solve the problem. However, this would still require allowances for compliant egress, traffic, curbside pickup, emergency vehicles, ADA accessibility, the impact on other shops (which may rely on parking spaces absorbed by new outdoor business areas), and much more.

The Portsmouth Design Professionals Alliance came together organically, under the invaluable guidance of Robert White from civil engineering company GPI, to solve these issues. Businesses in the architecture and design niche were particularly well equipped to problem solve for the new social distancing regulations and reorganization of public spaces.

The alliance coordinated with the Citizen Response Task Force, city staff, fire, and police chiefs to prepare for and execute a project aimed at reimagining Portsmouth’s streets. We would assemble a workbook to illustrate possible re-configurations of the downtown Portsmouth area. 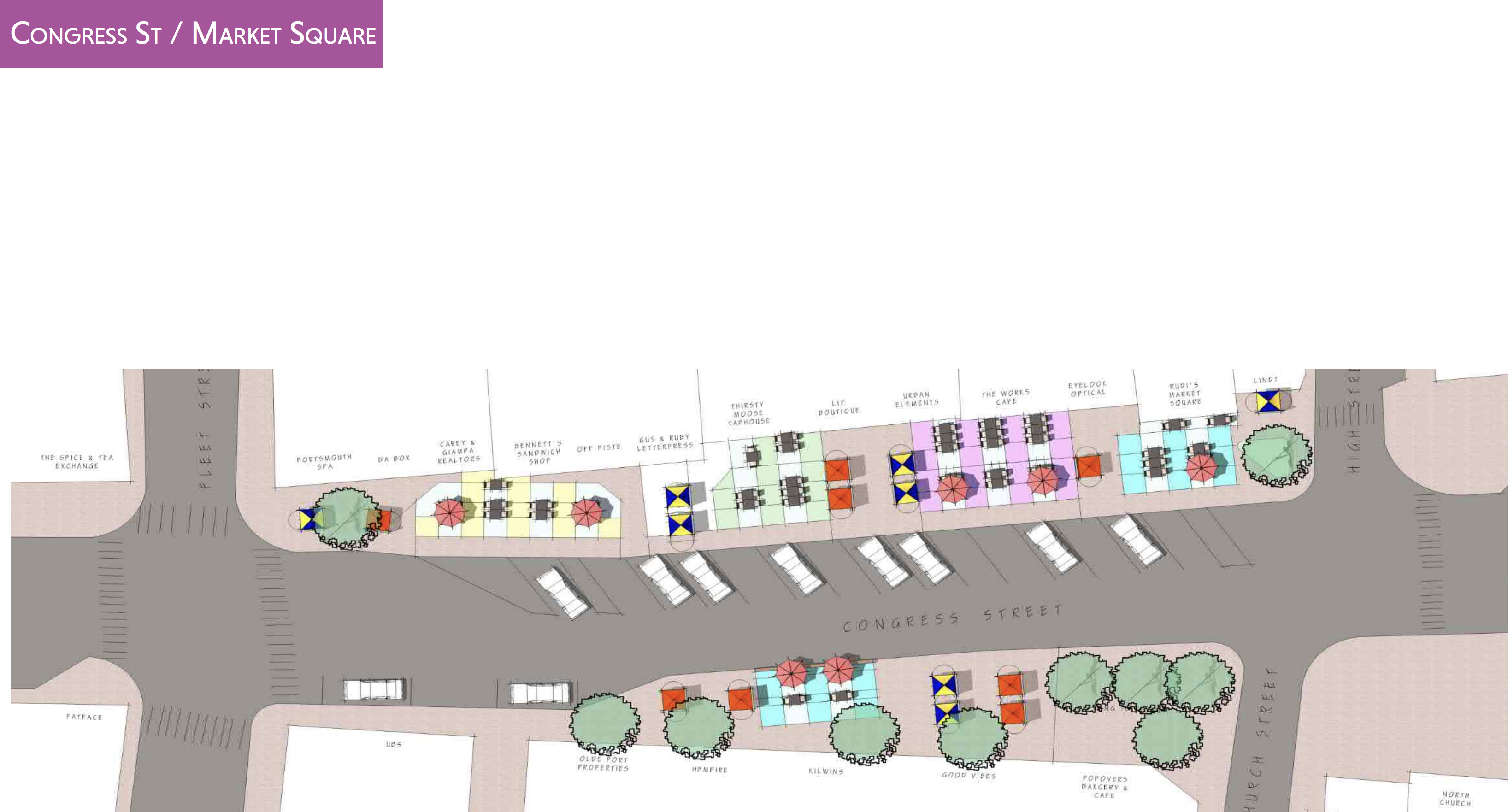 The involved businesses were tasked with coordinating amongst themselves to create overhead diagrams, descriptions of measures taken, and detailed renderings that would bring our hopes for the downtown economy into living color.

Such a workbook could even be put into the hands of other planners and communities to inspire their own local efforts to respond to the needs of a post-COVID world.

The general idea was to break up the areas of the city among each of the participating design teams. Each firm would tackle their own area and determine how best to address that particular street.  Tangram would pick five points in the city and render realistic before-and-after views to showcase the suggestions and ideas in those proposals. 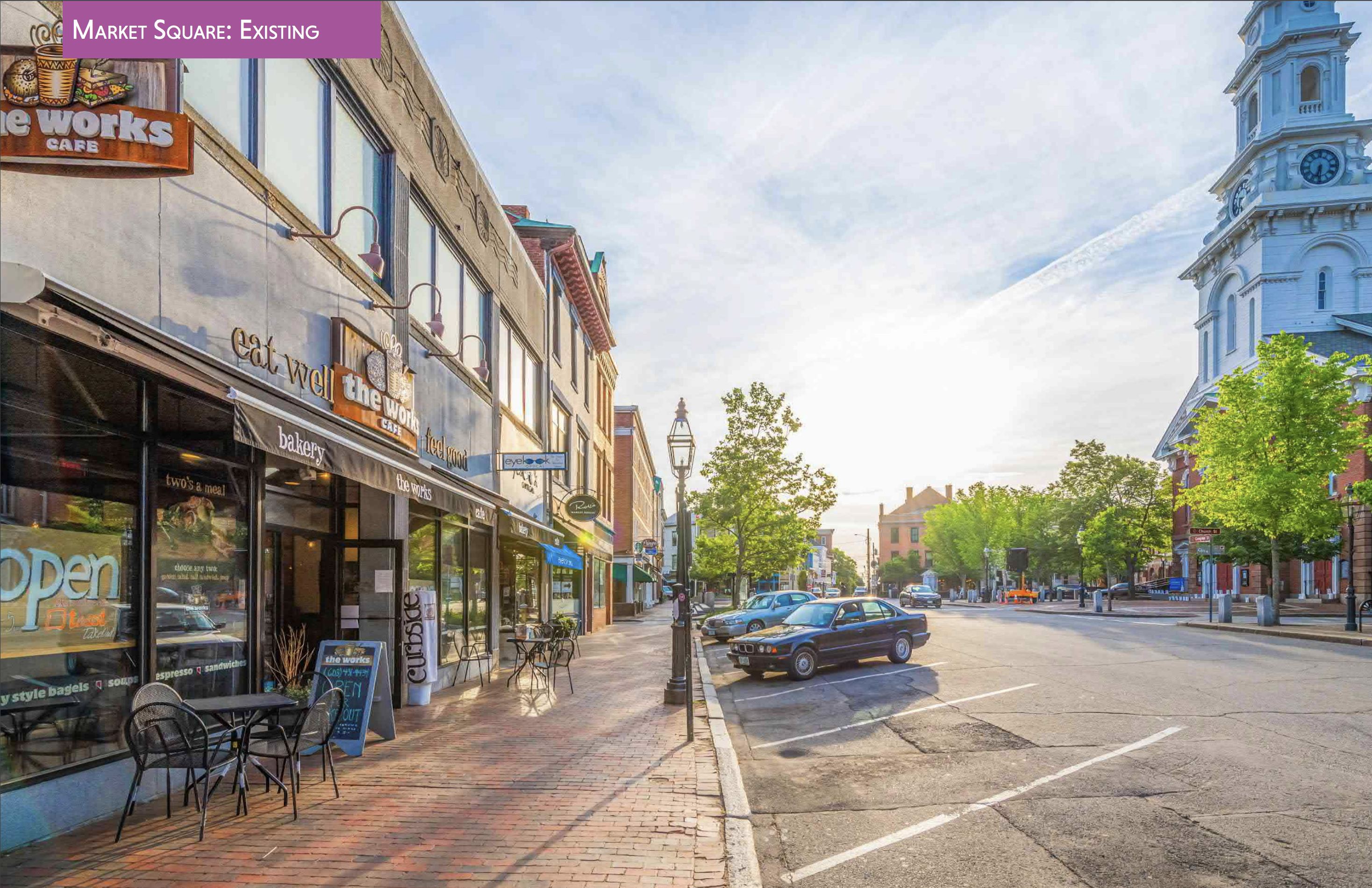 Jared Foley worked closely with Robert White to identify the locations, take photos at several times of day, and settle on which angles and times to use for each street view. Every firm and every team worked hard to put in volunteered overtime hours and get their part of the work done as soon as possible. As soon as each set of diagrams and design ideas made it to Jared, he could bring them to life on top of his base photographs. 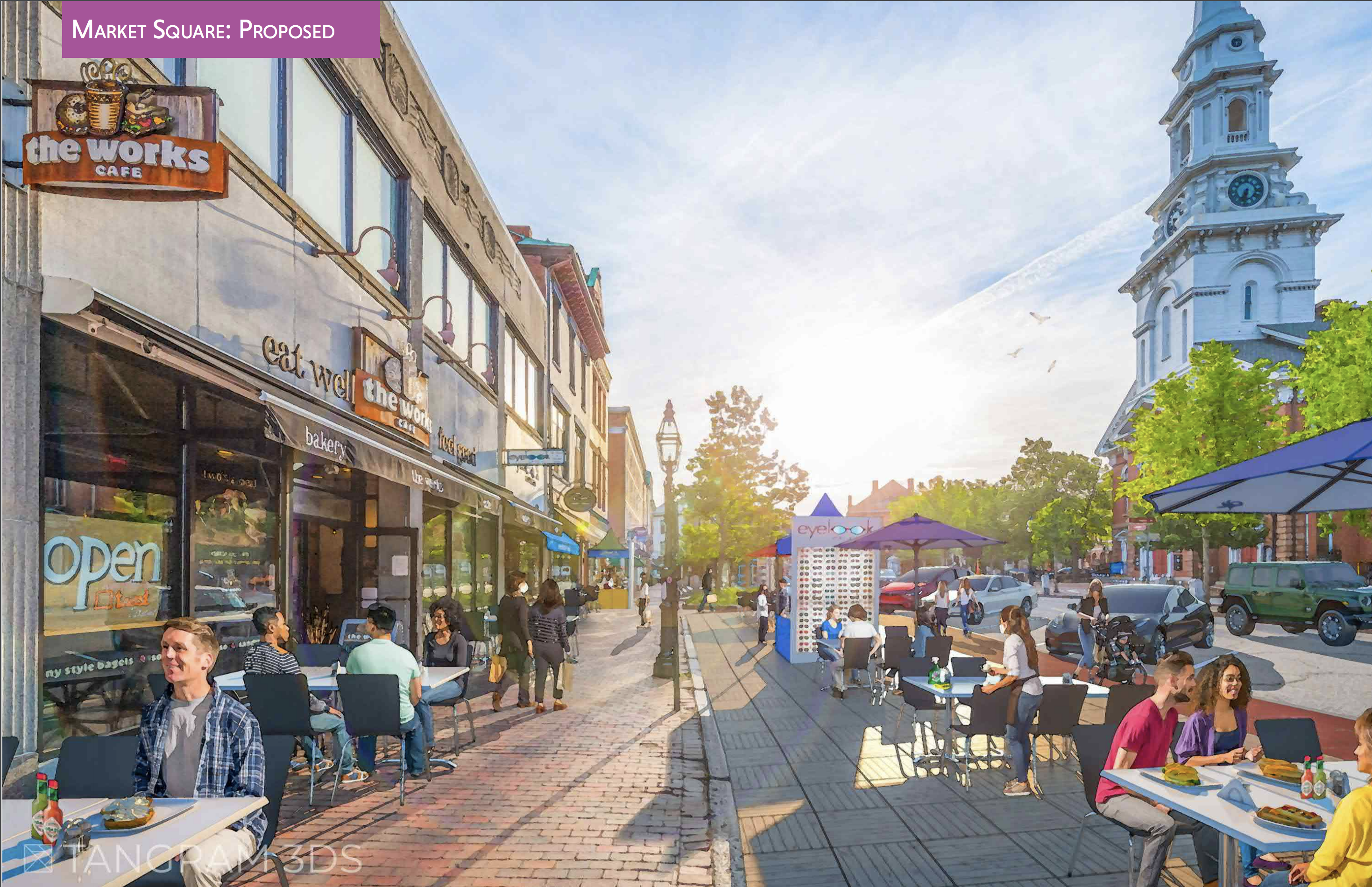 As one might expect, the bulk of the week needed to go to the architecture firms, who needed to clarify regulations, take measurements, and communicate with local officials (on top of all their creative work). This meant Tangram’s portion would be mostly reserved for the second half of the week.

In a span of a few days, we were able to clean up the selected photos, craft design details, and add people and life throughout each proposal view. But an interesting challenge presented itself: We didn’t want the renderings to look too photorealistic. If they did, the visuals would feel like settled and contracted plans, whereas these were intended to be creative concepts—starting points that could inspire the final designs pursued by affected businesses.

Our solution was to develop a new method for layering a watercolor effect over the photo and design elements. The colorful final images look instantly recognizable—they’re based on high-resolution photos of real downtown Portsmouth locations—but with the dreamy, sketchy, and aspirational feel of a painting. They carefully balance the desired artistic sensibility with detail, clarity, and truth to life.

The report took barely more than five days of work to come together from half a dozen independent teams, and is now published and in the hands of both city officials and the citizens’ advisory group established by the City Council.  The workbook will use an 11 x 17 format that shows off the public life and public squares we know and love in colorful beauty. 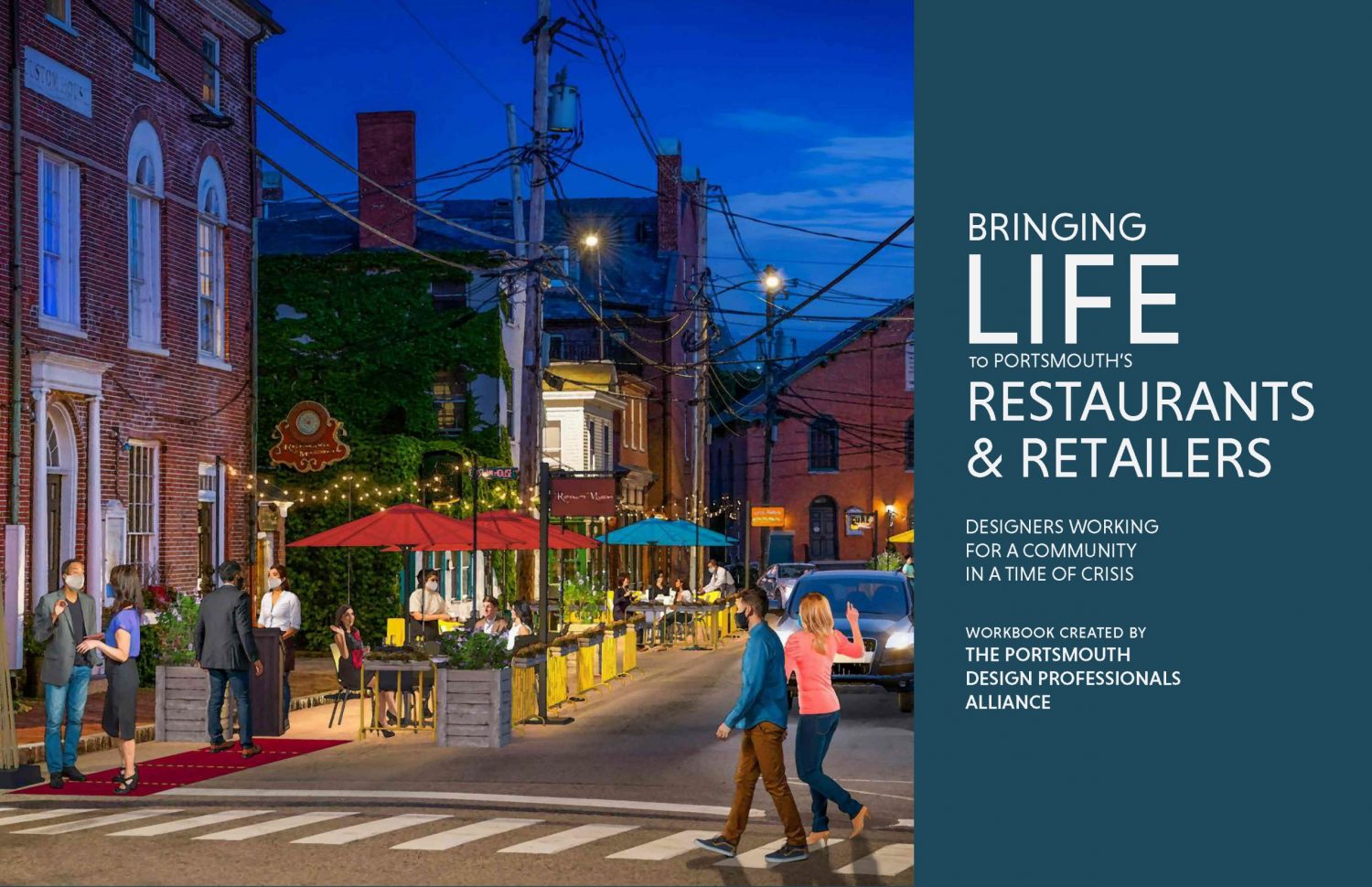 The completed Design Concept Workbook is now live and free to download here.

Very soon, the ideas contained within will ignite action to reopen our favorite places in a way that will not just accommodate them, but celebrate them. We’re so proud to have been a part of something this important to a town that means so much to Tangram 3DS. Our team couldn’t have done it without our fantastic friends and allies in the public task force, the city, and the Portsmouth Design Professionals Alliance.